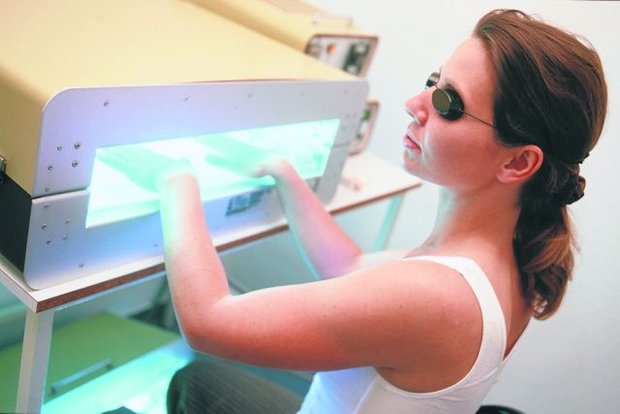 You can read a lot more about sunlight exposure and the benefits of light when it comes to psoriasis in my book Psoriasis, What To Do With Your Skin. Have you read it yet? It is one of the books in The Psoriasis Program. When it comes to medicine, light therapy is split into two different types: UVA and UVB. UVA represents the tanning rays of the sun, and is only effective with psoriasis when used in conjunction with psoralens (a drug that causes photosensitivity), whereas UVB is that part of the light spectrum that produces the biological effects of actually being in the sun, the skin turns red and burns.

A long time ago, the Egyptians figured out a cure for chronic skin diseases like dermatitis and psoriasis, they let the sun god Ra do the work. They would eat a certain kind of herb that grew near the river Nile and then lie in the sun. What they had worked out was that the plant made the skin more sensitive to the light, allowing the sun to effectively treat and eradicate the skin lesions.

We used to use PUVA once to achieve similar results to what the Egyptians did many thousands of years ago PUVA is long wave UV radiation and is also known as photochemotherapy. Patients would swallow a tablet of psoralens (furocoumarin, a skin sensitizing agent) and then lie under a specially designed UVA-emitting light. Treatments for severe cases of psoriasis in by-gone days usually included twice-weekly hospital sessions over a four to eight week period. Light doses were carefully monitored to exclude sunburn, and patients wore special glasses to protect their eyes when they were under the UV lights, as well as for the following day.

Today we rarely apply this kind of oral psoralen therapy. Topical PUVA therapy applied nowadays is generally limited to severe psoriatic plaques affecting the palms and soles. The affected areas are soaked in a solution of the photo-sensitizing agent before exposing the patient to ultraviolet light.

Skin specialists like this kind of treatment for the most severe cases of plaque and guttate psoriasis. The problem unfortunately is that there is a fine line between the right amount and too much exposure – leading to an increased risk of skin cancers. Your risk of developing cataracts is also increased. There is no doubt that this treatment works, in fact it is more than 90 percent effective in clearing up the skin in four to six weeks, but some patients end up experiencing side effects including nausea, headaches, insomnia, lethargy and stomach pains. That’s why these types of UV treatments today are not used much anymore for the more severe forms of psoriasis, in favor of drug-based treatments.

This application of what essentially amounts to artificial sunlight, is particularly popular in Europe and Scandinavia. UVB radiation is used around the world by dermatology units. It has been found to be most effective for plaque and guttate forms of psoriasis. Usually a patient will be recommended this kind of treatment if they have large skin surfaces that need treatment, or their psoriasis is resistant to effective treatment with topical agents.

UVB has been proven to be more effective than topical corticosteroids, has similar effects like dithranol and coal tar but is much more pleasant to use, and the side-effects are a lot milder than PUVA or drugs like methotrexate. Most patients tend to become clear of their lesions after about six to eight weeks of treatment, involving 5 treatments per week. The treatments only last anywhere from 90 seconds up to 15 minutes, and most dermatology units are open extended hours, so that patients can even drop in for a quick treatment before, during or after their work, causing minimal disruption to their routine. How long is the treatment effective for you ask? On average, patients remain clear for at least eight weeks (some even longer), and experience only mild recurrence of symptoms for a further two to three months, making UVB treatment a worthwhile time investment.

Most patients I know who use this form of light therapy use it during the winter months, and during the summer they enjoy the outdoors, especially the sun and surf. Spending time at the beach and going swimming in salt water regularly is one of the best things you can do if you have psoriasis. Regardless of whether you use UVA, UVB therapy or enjoy being in the sun, bear in mind that phototherapy ages your skin and may eventually cause skin cancer, so it should not be continued indefinitely.