What is psoriatic arthritis? 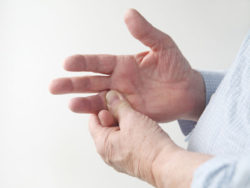 Psoriatic arthritis is a chronic disease characterised by inflammation of the skin (psoriasis) and joints (arthritis). Psoriasis is a common skin condition affecting approximately 2% of the population, this skin condition is characterised by patchy, raised, red areas of skin inflammation with scaling. Psoriasis can affect any part of the body, but most often affects the tips of the elbows and knees, the scalp, the navel, and around the legs, hands and nails. Approximately 5 – 7% of psoriasis patients also develop an associated inflammation of their joints, a condition we know as psoriatic arthritis. Patients who have inflammatory arthritis and psoriasis together, are diagnosed as having psoriatic arthritis.

The interesting point with auto-immune conditions is that there are “no known causes” as far as conventional medicine is concerned, and the cause of psoriatic arthritis is currently unknown. A combination of genetic, immune, and environmental factors are likely involved. There is a gene involved, and the HLA-B27 gene is found in over half of those who have arthritis of the spine, and recently a blood-test has become available to quickly test for this marker. With ankylosing spondylitis, HLA-B17 is also apparent.

How does the doctor diagnose psoriatic arthritis?

Psoriatic arthritis is a diagnosis made mainly on clinical grounds, based on a finding of psoriasis and the typical inflammatory arthritis of the spine and/or other joints. There is no laboratory test to diagnose psoriatic arthritis. Blood tests such as sedimentation rate may be elevated and merely reflect presence of inflammation in the joints and other organs of the body. Other blood tests such as rheumatoid factor are obtained to exclude rheumatoid arthritis. When one or two large joints (such a knees) are inflamed, arthrocentesis can be performed. Arthrocentesis is an office procedure whereby a sterile needle is used to withdraw (aspirate) fluid from the inflamed joints. The fluid is then analyzed for infection, gout crystals, and other inflammatory conditions. X-rays may show changes of cartilage or bone injury indicative of arthritis of the spine, sacroiliac joints, and/or joints of the hands. Typical X-ray findings include bony erosions resulting from arthritis. The blood test for the genetic marker HLA-B27, mentioned above, is often performed. This marker can be found in over 50% of patients with psoriatic arthritis who have spine inflammation.

What does the future hold for patients with psoriatic arthritis?