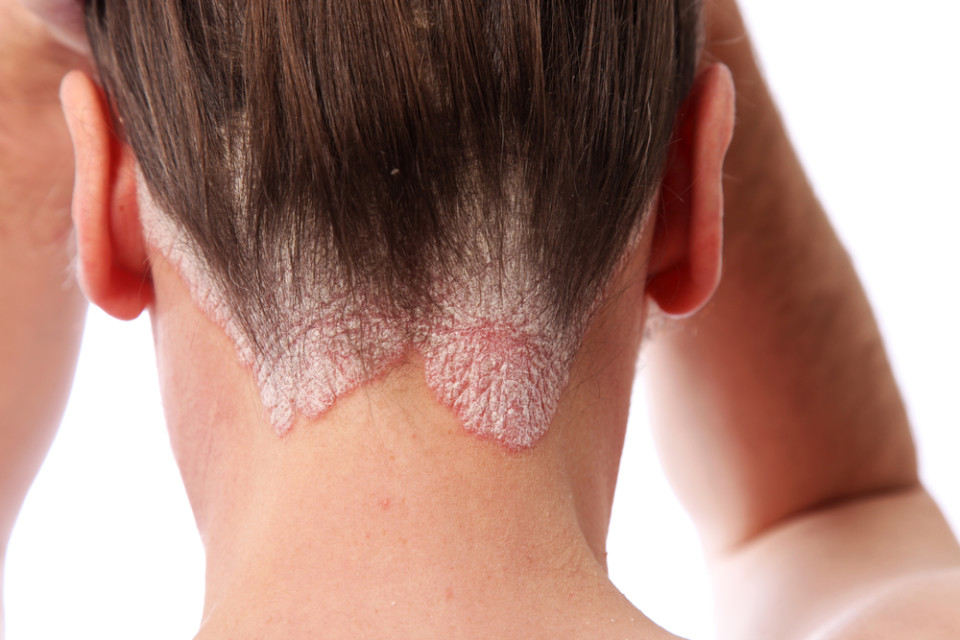 Many patients want to learn more about psoriasis, and are unfortunately not told much about their condition by their medical doctor. Psoriasis comes from the Greek word psora, meaning fine bran like scaling. Psoriasis afflicts 1% – 4% of the general population, and is a type of chronic skin condition where itchy scaly red or white flaky patches form on the scalp (in approximately 40% of cases), elbows, forearms, knees, groin, and legs or lower back. For many it is a condition that seems to “come and go,” and may appear as a few spots or involve large areas. It is not contagious, either to other body parts or other people. It is characterized by thickening of the skin (epidermis), which reveals bleeding points upon removal of the scale.

The cause of psoriasis is uncontrolled skin-cell growth. In its topical manifestation, untreated psoriasis forms a thick and crusty silvery or whitish, dry, scaly layer of lots of dead skin cells called “plaques”.

A plaque comes about because the mass of these dead skin cells and because of their decay. The skin of a psoriasis sufferer will divide (differentiate) around a thousand times faster that the skin of a normal person, or somebody who does not have psoriasis. Plaque psoriasis accounts for 90 percent of all people who present with psoriasis, and join disease is associated with psoriasis in a significant proportion of all those who have psoriasis, in one study it was reported as high as 13.8 percent.

Some people don’t understand how come they bleed when psoriatic lesions are scratched. What happens is that the redness of inflammation underneath this crusty layer of cells is the build up of blood in the circulation, blood that is sent to the area to nourish the mass of rapidly dividing cells. When a person scratches away the plaque it will be noted that there are dilated capillaries underneath, and with excessive scratching there will be bleeding as well, something that is common with many patients who have chronic psoriasis.

I have noticed that some patients with psoriasis complain of excessively itchy skin, whereas others don’t seem particularly bothered with their skin itching. Maybe the climate has something to do with it, or perhaps it has to do with a person’s internal temperature regulation.

Some cases I have seen are quite severe, and can be quite physically and emotionally traumatic for the person involved. In most cases however, psoriasis is confined to a few spots, and seems to affect many people on the sides or at the back of the head.

Many patients will visit a naturopath with their psoriasis, and we are often the ‘last port of call’ when it comes to chronic conditions affecting the skin. Long-standing psoriasis patients often have been to a skin specialist (Dermatologist) and tried many creams, tar solutions, been prescribed pharmaceutical drugs and various other lotions and potions along the years.

Natural medicine does have a big role to play in helping alleviate psoriasis however. Skin eruptions are generally curable to a large extent if the patient perseveres with their treatment long enough, however, skin irritants such as the sun, anxiety, stress, and various other triggers take their toll over time, and the person relapses again.
It can help sufferers to identify their individual triggers, to eat a more ‘psoriasis-friendly’ diet, and to learn about the effects of stress and nervous tension on psoriasis.
Psoriasis is a stubborn and difficult condition to treat, both from a practitioner as well as patient’s perspective. Successful treatment requires patience, diligence and long-term treatments with detoxification to observe any true lasting benefits.

Psoriasis is Classified as an Auto-Immune Condition

Autoimmune disorders are diseases caused by the body producing an inappropriate immune response against its own tissues. Sometimes the immune system will cease to recognize one or more of the body’s normal constituents as “self” and will create autoantibodies – antibodies that attack its own cells, tissues, and/or organs. Auto-immunity causes inflammation and damage and it leads to autoimmune disorders. There a lot of symptoms associated with autoimmune diseases, and some may appear to fall under the same category as autoimmune disease, but they are really unrelated. If you every have any doubts, seek out the care of an experienced health-care professional to get the best diagnoses. On many occasions I have correctly diagnosed psoriasis in a patient after the same patient was diagnosed as having eczema or dermatitis.

As part of its defense against foreign invaders, there are various organs in your body that collaborate to pump out specialised white blood cells called “T cells.” Under normal circumstances, T cells are programmed to identify and coordinate an attack on enemy combatants, and these invaders can by viruses, parasites or different foreign bacteria. When you have psoriasis, T cells mistakenly identify your skin cells as “foreign” and attack them. This attack injures the skin cells, setting off a whole cascade of responses in your immune system and in your skin, resulting in skin damage. This damage results in the typical swelling, reddening and scaling that psoriasis patient’s experience.

In an effort to heal your skin, your skin cells begin to reproduce rapidly. Programmed skin growth that should take a month take place in only a few days, and unusually large numbers of new skin cells push their way to the surface of your skin. This occurs so quickly that older skin cells and white blood cells aren’t shed quickly enough. These discarded cells pile up on the surface of the skin, creating thick, red plaques with silvery scales on their surface: the hallmark of the classic form of plaque psoriasis.

Is It An Allergy Or Is It Psoriasis?

Could it be an allergic skin reaction you have, or really psoriasis? Symptoms of allergies like dry eyes, dry mouth, light sensitivity, headaches, and swollen glands can also be symptoms of an autoimmune disease. That doesn’t really make detecting an autoimmune disease very simple. However, if you experience allergies seasonally for six months out of the year, each year, around the same time, then it is most likely just allergies. If for any reason the symptoms show up unexpectedly or are continual without a break, then it’s time to see your health-care professional.