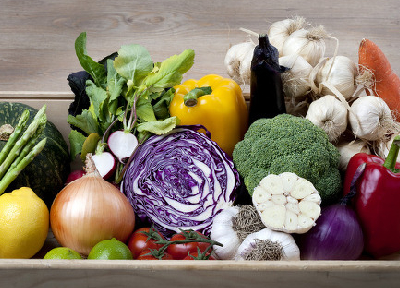 Antioxidant foods for psoriasis are an important consideration for those people who do have psoriasis, and who want to improve their diet and make their diet work for them. The skin in patients with chronic psoriasis, much like the skin in those who have received significant burns, has been found to have increased levels of the enzyme called xanthine oxidase.

This enzyme is easily capable of generating free oxygen radicals. In studies involving mice it was discovered that high xanthine oxidase activity was associated with hyperplasia of the skin, i.e; a psoriasis-like effect was observed. This is almost the same as what happens in humans, when xanthine oxidase activity increases to a level five times greater than normal, cellular hyper-proliferation occurs. This means that skin cells begin to grow at a much faster rate and begin to shed.

To counter the effects of oxidative stress, “anti” oxidants can be given both orally and topically (on the skin). By reducing the quantity of free oxygen radicals caused by inflammation, it is possible to reduce the hyper proliferation state of the skin as is experienced in psoriasis.

When you have psoriasis, it makes therefore good sense to include antioxidant rich foods in your diet every day to counter enzymes such as xanthine oxidase.

Antioxidant foods are foods that are particularly high in vitamins A, B6, C, E, zinc, selenium, and folic acid. When you have psoriasis, it is best to consume colorful vegetables and fruits often, because they tend to provide richest amounts of these anti-oxidant and inflammation fighting nutrients.

In a 2009 study5 with regards to antioxidants and psoriasis, 58 people were admitted to the hospital emergency room with psoriatic arthritis (an arthritic type of psoriasis of the skin and joints), or plaque psoriasis (affects the skin over much of the body surface). The psoriasis sufferers from both groups were separated into two groups – the treatment group with antioxidants (50 mg of coenzyme Q10, 75 IU of vitamin E, and 48 mcg of selenium per day) and conventional medicines, or the group receiving conventional medicines and a placebo. After just one month, the psoriasis patients with psoriatic arthritis had a 45 percent lower symptom severity score compared to the placebo group, and the plaque psoriasis patient group receiving the antioxidants and conventional medicines had experienced a 37 percent lower symptom severity score when compared to the placebo group.

Cautious Of The Nightshade Family Of Vegetables

Did you spot the bell pepper (capsicum) and tomatoes in the image above? They belong to the vegetable family of nightshades, be cautious of the nightshade family of vegetables, as I’ve mentioned in the Psoriasis Diet book, as these are colorful and contain antioxidants but often best avoided by those with psoriasis because they contain a class of chemical called alkaloids, and these alkaloids can provoke and stimulate inflammation, rather than suppress. Avoid them a a trial, and while you may be one of those psoriasis patients I have seen who can tolerate them, I have seen many who improved significantly once these vegetables were removed from their diet. It’s all about trial and error.

As you will see from the table, fruits and vegetables are not the only source of antioxidants, you will find that nuts and seeds as well as whole grains contain these antioxidants as well. The benefits of antioxidant rich foods is not limited to reducing any oxidative stress, many antioxidant rich foods can also fight the inflammation of psoriasis, and are very important to protect a psoriasis patient against heart disease and cancer, diseases that psoriasis sufferers are at a higher risk of developing. Let’s take a closer look an inflammation and anti-inflammatory foods.